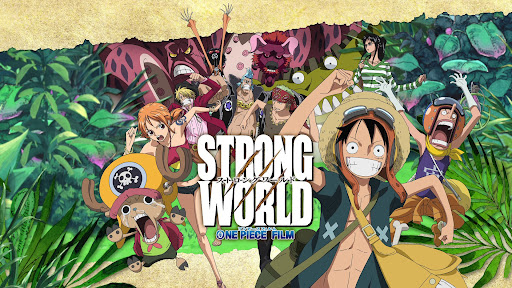 One Piece Strong World premiered 12 years ago in 2009. The movie has been available on multiple streaming services since its release. In honor of the 1000th episode of One Piece, One Piece: Stone World has its United States theatrical release on November 7, 2021.

One Piece is one of the longest running animes and mangas to date. Creator Eiichiro Oda loves tossing in Easter eggs for fans to find. As a master of world-building, the little tidbits Oda sprinkled into One Piece are easy to miss if you aren’t paying attention.

The silly nature and light-heartedness of One Piece are just some of the things fans love about the series and the movie. This leads to the question, what are the five things most fans missed in the One Piece: Strong World movie?

One of the most common Easter eggs in any series is the insertion of the creator themselves. Whilst some tend to make themselves an obvious character, creator of One Piece, Oda was a bit more subtle than that.

On one occasion, he placed himself into One Piece as a background character. This character showed a series of books, one of them being the title One Piece and the other having his name on the spine.

This is one of the few occasions that Oda has put himself into the series, but there are likely several other instances of this happening. Some even try going through the manga in search of instances like these. There is no doubt that there has been an insert in the One Piece movie as well.

It’s common knowledge that the creators of both One Piece and Naruto respect each other and their work. To show this, both creators have been known to add nods throughout their work. The biggest nod has to be the cover of One Piece Chapter 766.

The artistic style is filled with nods to Naruto. Nami’s dress is covered in the symbol for Konoha, as well as a tiny fox next to her. Naruto himself is seen eating behind Nami. Throughout the rest of the series and movies alike, Luffy can be seen eating the famous Ichiraku Ramen from Naruto.

Throughout One Piece, Sanji’s backstory has not been fully revealed until after the Alabasta arc. That was when it was made clear that he was, in fact, the prince of the kingdom of Germa. The only clue to this reveal was Sanji’s strange choice of nickname.

When contacting the higherups of Baroque Works, Sanji had to use a nickname. He chose to use Mr. Prince. A name that did not make much sense until it was later revealed he was royalty. A trope that carries on throughout One Piece: Strong World.

In One Piece, Laboon was an enormous whale that greeted the Straw Hats as they first entered the Grand Line. He was seemingly depressed after being abandoned by a pirate group long ago. Although much information was not given about the group, it was clearly important enough for Oda to mention.

The Straw Hats eventually ran into a skeleton named Brook, who was the last remaining pirate from an old crew. It was revealed that he wanted to reconnect with a dear friend who his crew had to abandon years ago. Heartwarmingly, that friend is Laboon. Something Oda alluded to long before they met Brook.

1) Robin’s appearance on the Going Merry

One Piece has a general rule of enemies never being shown on the Straw Hat’s ship. Both the Going Merry and the 1000 Sunny have been known to be safe spaces for the Straw Hats. More so the Going Merry than anything else. The Merry only had a single enemy set foot on it, Robin.

On this day in 20 years ago, we watched Miss All Sunday appear on the Going Merry and take Luffy's straw hat for the first time. #OnePiece pic.twitter.com/zzk27csxWM

Before the Straw Hats even went to Alabasta, Nico Robin showed up on the Merry. She seemed to be completely comfortable on a ship surrounded by enemies, which is odd.

Not only is it strange in the One Piece world, but just unusual in general. Oda, however, intended for this to be an Easter egg. Her relaxed demeanor on the ship indicated that she would eventually join the Straw Hats and remain a part of their team.